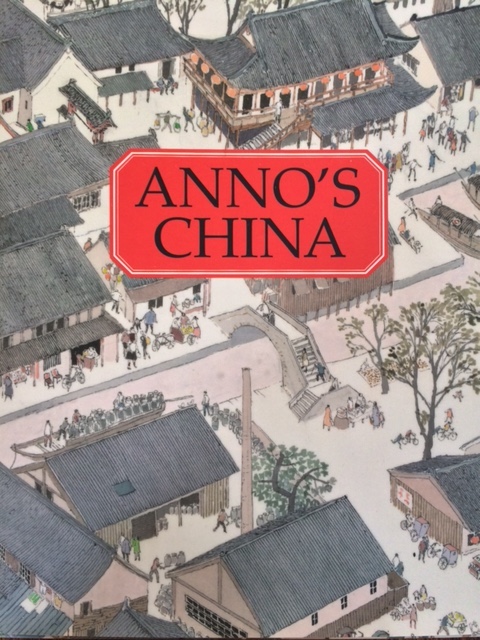 The work of Mitsumasa Anno has been beloved since the 1970s when his first books appeared in the United States. His first US title was Topsy Turvies (1970) and in 1978 the book that acquainted me with his work appeared. That was Anno’s Journey–a truly inspired and for me, enchanted wordless journey through Europe. The genius of Mr. Anno’s work is in the delightfully detailed watercolors that lead the reader from pastoral scenes to village and finally to city scenes. Life is presented within the simplicity of quotidian routine–farmers tending their fields, shepherds guarding their flocks, a merchant selling wares, or a child playing hoops. Then suddenly, suddenly, out pops a scene from an Impressionist masterpiece, or a character from a novel, or a scene from one of Shakespeare’s plays. Traveling with Anno through Anno’s Journey is a delight to all who love art, architecture, literature, geography, culture, or children’s books! For instance, hidden within his inviting scenes, one will come upon Van Gogh’s Langlois Bridge or Georges Seurat’s A Sunday on La Grande Gatte or his Bathers at Asnières. Less artistically inclined “readers” will find delight in Anno’s hilarious depiction of the silly king from The Emperor’s New Clothes, or the unsuspecting Little Red Riding Hood innocently picking flowers while the wily fox watches from the woods. Then there is Pinocchio, running through the streets! Even young children will experience the thrill of discovery when they notice the four whimsical characters–the donkey, the dog, the cat, and the cock from the well-loved Tale of the Bremen Town Musicians or see the iconic red balloon wafting up off the page from the Oscar-winning French film short of the same name. There is something for everyone here, even the youngest child will love just poring over the pictures with their intense colors, humor, and variety.

Over two years ago, I contacted the Japanese publisher of Mr. Anno’s work, Fukuinkan Shoten, to see if Beautiful Feet Books could publish Anno’s Spain, which had been out of print for some time. In the process of that journey, I also found that Mr. Anno had done a Journey book on China, which had never been published in the US before. Not only that, I also discovered that for each of Mr. Anno’s Journey books (there are now 8) he had written wonderful back matter to accompany each scene. These have never been translated and published in the English language editions, which is a shame, as Mr. Anno’s voice is as endearing and warm-hearted as his art. So, for the editions that Beautiful Feet Books is bringing out, we are thrilled to be including these wonderful notes. After that, we will begin work on Anno’s Japan and Anno’s Denmark.

Just a few weeks ago we took delivery (like proud parents with a new baby!) on Anno’s China–the first time this beautiful book has ever appeared in America. Just like his other books, “readers” will accompany Anno as he travels through China, exploring life in this vast and majestic land where birds fish for men, where dragons and lions dance, and where thousands of clay soldiers and calvary guard the tomb of China’s first emperor. Anno’s China received a Kirkus starred review which you can read about here.

I am currently working on bringing Anno’s Spain back into print as well. I am finishing up editing the translation from the Japanese to English and expect to go to print early Spring. I will continue to post more about Mr. Anno’s work as we continue this wonderful journey with him!